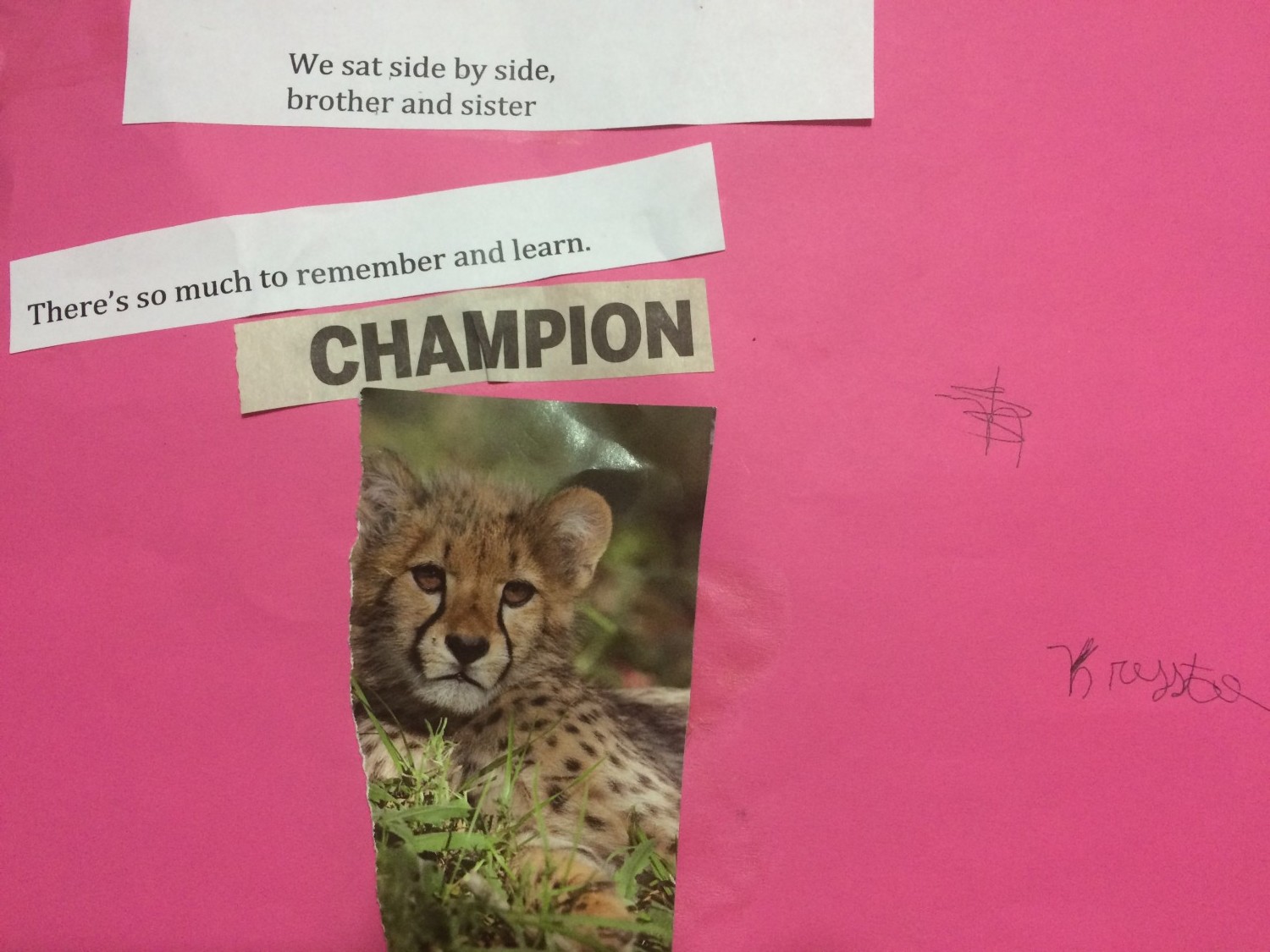 On March 11th, five facilitators from SDSU lead a poetry workshop at Monarch School in downtown San Diego. Monarch School serves youth impacted by homelessness and is the only school of its kind in the United States. Twenty energetic elementary school students attended the poetry workshop, which consisted of three different creative activities plus a miniature reading of student work.

When students streamed into the gym for the workshop, they sat at four long, wooden tables to participate in a warm-up activity which mimicked magnetic refrigerator poetry from the ‘90s. The facilitators spread cut-up pictures and lines of text from magazines, Shel Silverstein poems, and nursery rhymes across the tables. Students chose at least three lines of text to create an original poem. Then, they paired it with a picture to create a unique, multimodal work of art. 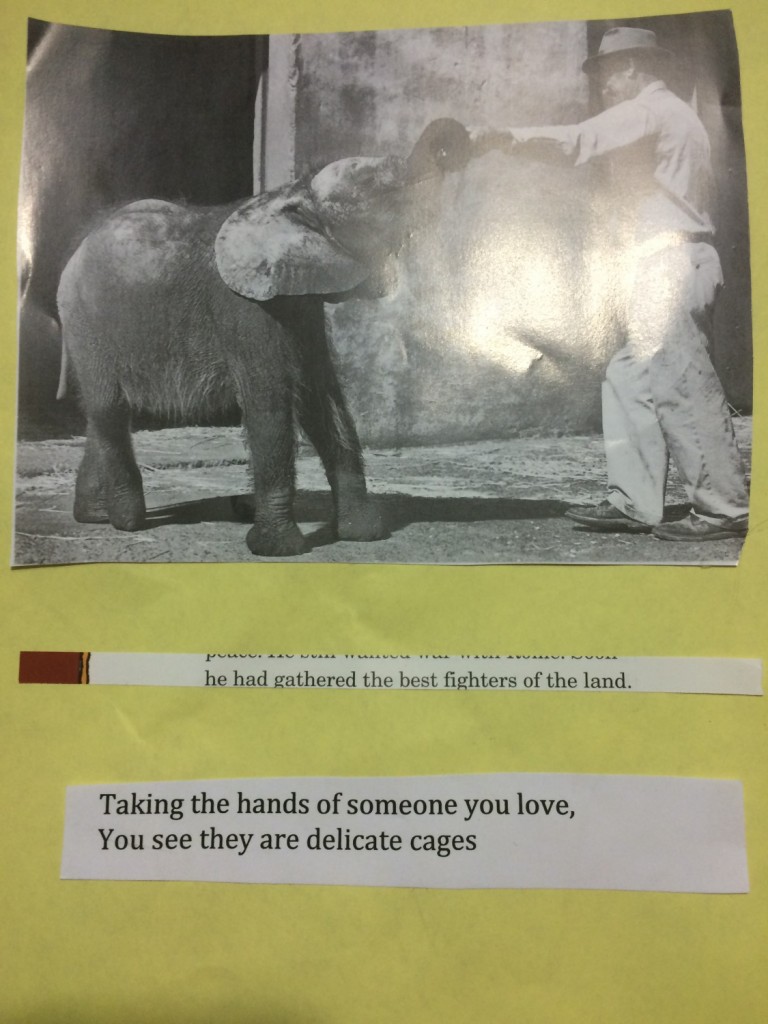 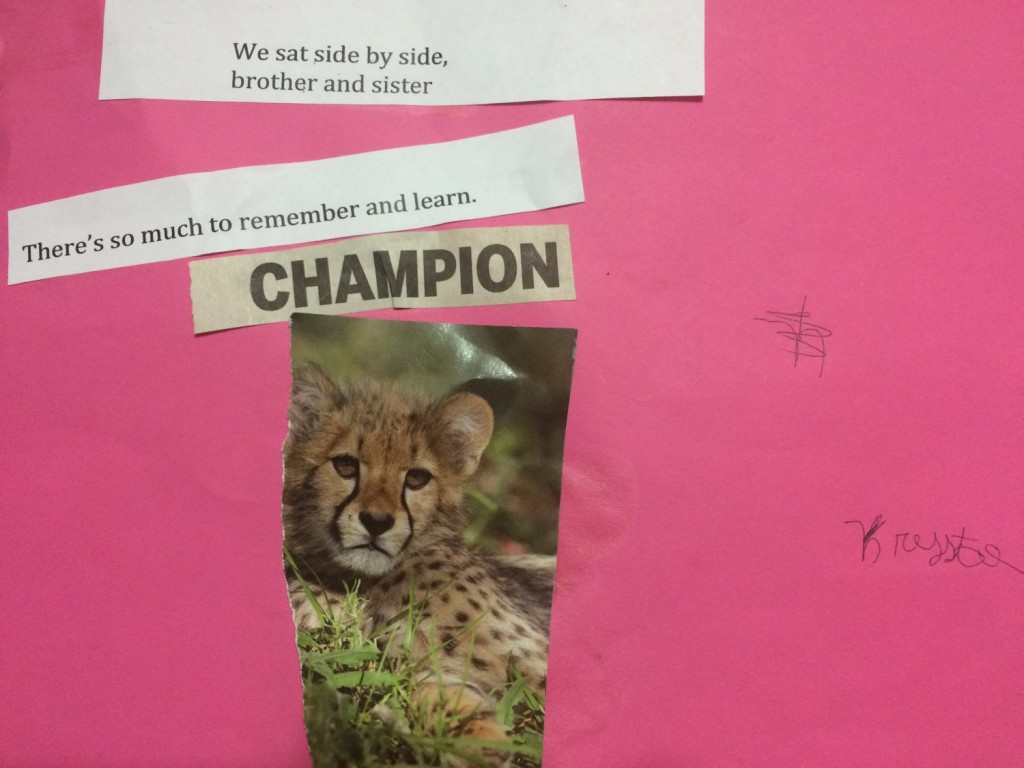 After the warm-up activity, the facilitators split the children into two stations.

At the first station, Janel and McKayla explored the concept of metaphors with the students. The children worked in two groups. Each group brainstormed a list of abstract questions, for example, “What is anger?” and a list of unrelated images, for example, “He is red and black and saves whole cities,” (a description of the highly-popular DeadPool). Afterwards, the first group asked aloud one of their questions to which the other group answered aloud with one of their images, thereby creating an oftentimes surprising metaphor:

Group #2: He is red and black and he saves whole cities.

The students then used these questions / answer pairs to write their own metaphor poem. 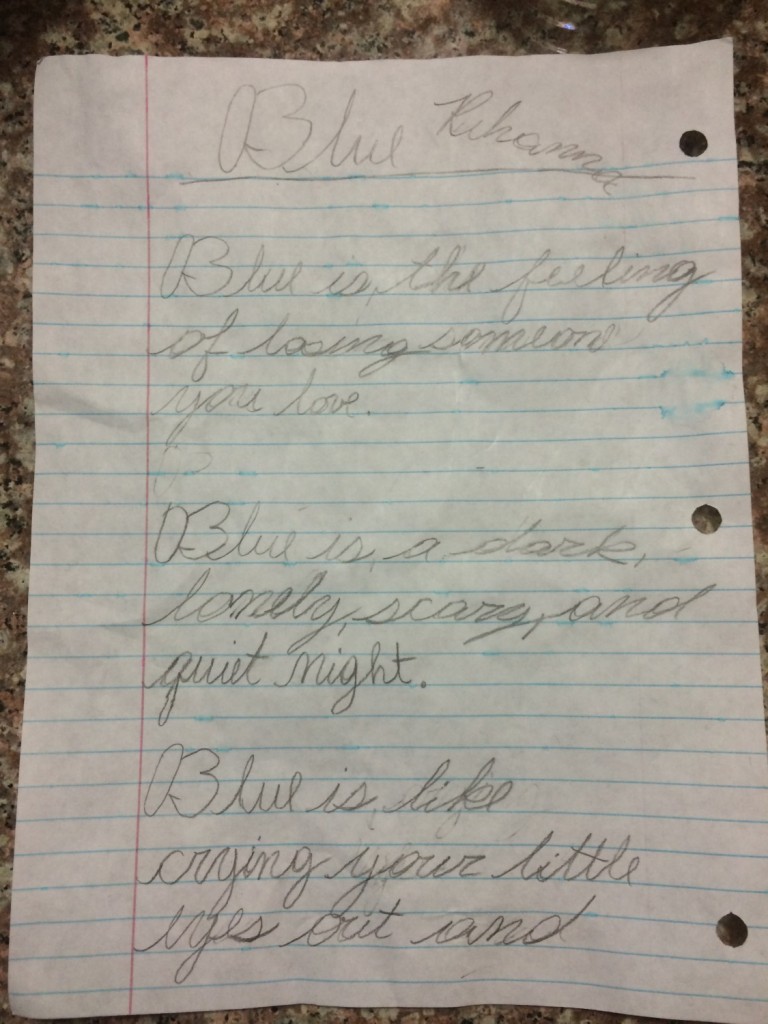 “Blue is the feeling of losing someone you love. / Blue is the dark, lonely, scary, sad, and quiet night. / Blue is like crying your little eyes out…”

Meanwhile, at the second station, Nia and Daniella played an activity in which the students used their imaginations to write a creative poem about superpowers. The students chose an object from an assortment of random objects and then answered questions about themselves and their object: “What does the object do? What superpower would you like to have? What superpower would your object have? How did this object come to have that superpower?” While answers varied, many of the kids chose powers related to love and kindness. One girl wished to have a power to make everyone be kind to each other. Another wished for the power to end homelessness. Some of the students chose to share objects with one another, which led to creative collaboration between the young poets.

After all of the students completed both stations’ activities, they gathered in a circle to read and hear one another’s work. Most were eager to read their poems; for those who were too shy to read but still wanted their work to be heard, the leader of Poetic Youth, Jenny Minniti-Shippey, read it for them.

This was Poetic Youth’s first workshop at Monarch this spring. We loved helping these budding young poets put pen to paper, and we’re looking forward to more workshops in the future!